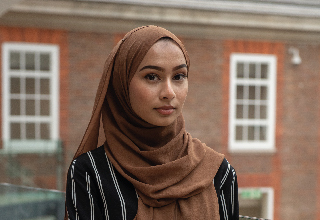 Islamophobia Awareness Month is a month which highlights the threat of islamophobia hate crime. As well as showcasing the positive contributions British Muslims contribute in our modern society. MDX Islamic Society is one of the biggest student groups at Middlesex University and has been for over 10 years. It is important to pay attention to issues of islamophobia whether it be in the work place, study space or even at home.

Why is Islamophobia Awareness Month so important? With at least 7,000 islamophobia hate crime incidents taking place each year, systemic discrimination against Muslims in the workplace and relentless media negativity. The acknowledgement of Muslim struggles across the globe is being undermined and neglected.

What about you? What comes to your mind when you see a women in a hijab? Honestly? Do you think she’s oppressed? Do you think she’s unhappy? Or do you acknowledge that a hijab is her way of expressing herself - just like you express your identity in the way you want. It’s an act of freedom for a Muslim Women to choose to wear a hijab and visa-versa.

It’s disgusting that the ban of the hijab in French institutions is taking place in this moment in time. In the 20th Century, women are still fighting for their rights on how much fabric they choose to cover their bodies with. Essentially that’s what it is. It’s a piece of cloth that the media and government have chosen to demonise and outlaw. Another example of nationwide islamophobia! Do they think they’re saving us from oppression?! Or is this policy a form of oppression in itself?!

There are current events happening around the world where Muslims are being brutally murdered, raped and oppressed just for expressing their religious beliefs. The news won’t tell you about the concentration camps in China, facilitated to eradicate the Islamic communities from the entire country. The news won’t tell you about the Israeli government senselessly killing innocent Muslims – and the news won’t claim to be Islamophobic, but will continuously give air time to Islamophobes, making Islamophobic comments.

ISOCs (Islamic Society) around the country are a prime example of groups of Muslims who are consistently washing their hands from the dirt they never made – the Muslim community is consistently having to justify their religious beliefs and practices within a society that promote freedom of speech and freedom of expression. Therefore rebuilding a reputation that has been stained by the media. From charitable fundraisers and open discussions – Middlesex ISOC encourages inclusion and community, regardless of the constant conscious and unconscious biases amongst their peers, lecturers, social media and media outlets.

As a visible Muslim women and as your Vice President Professional and Social Sciences, I am in a prime position to be criticised for my faith as well as my gender and that is why I want to use my platform to make Middlesex a safe space for everyone – but I need your help.

This year I am campaigning for greater inclusion across campus, whether that’s in your course curriculum, your teaching and assessment or in extra-curricular activity such as sport. I’m very excited to announce that, following on from meetings with University staff, the sports department will soon be stocking and selling sports hijabs for Muslim women who wish to participate in sporting activity. This is a fantastic campaign win, and one which I believe will help to create an environment in which Muslim women are able to play sports without having to compromise their modesty.

I plan to continue campaigning for greater inclusion at Middlesex University, and urge anyone interested in this campaign to contact me via email: T.Choudhery@mdx.ac.uk.

Help support MDX Sport by being more inclusive by completing their survey at www.surveymonkey.co.uk/r/MDXSport2019 for a chance to WIN an iPad or £25 iTunes.