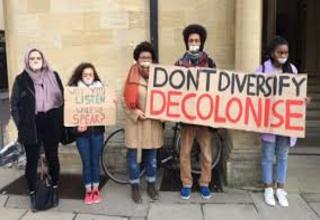 what do we mean?

As your Student Officers we are excited to be launching one of our priority campaigns this year which falls under the theme of diversity and inclusion. This campaign is about ‘Decolonising the Curriculum’, and the aim of this blog is to explain how this work could impact students at Middlesex. Before we get into our planned campaign activity, we thought we should give some context behind where it came from.

On the 9th March 2015, Rhodes Must Fall (#RhodesMustFall) was a protest movement at the University of Cape Town, originally directed against a statue at the university commemorating Cecil Rhodes. A month later, following a university council vote, the statue was removed. This protest received global attention which then led to a wider movement to ‘decolonise’ education in South Africa, and inspired the emergence of allied student movements across the world such as; Rhodes University (2015), Harvard Law School (2015), University of Oxford (2016) and the University of Edinburgh (2016).

At universities across the country, students are demanding for their reading lists to include scholars and authors that are more representative of them, including; black and minority ethnic (BAME), LGBT+, women and disabled writers. Nonetheless, the campaign still faces scepticism and resistance, with a narrow view that this work could be a mistake, particularly from those who may feel threatened by recent challenges. This campaign doesn’t aim to eliminate white men from your curriculum, instead, it focuses on challenging the longstanding bias which limits how we understand politics, society and the world around us. When the reading lists offered to our students are white male dominated, this teaches our students a skewed perspective on who is an intellectual authority and who deserves attention. Our aim is to ensure all students can see themselves reflected in the curriculum they are being taught and to be able to identify with sector leaders regardless of their background.

So, what do we actually mean by ‘decolonising the curriculum’? In the Oxford Dictionary, it states that ‘decolonisation’ is “the withdrawal from its colonies of a colonial power; the acquisition of political or economic independence by such colonies”. This mostly refers to the dismantling of the colonial empires established prior to the First World War, in the years that followed the Second World War. This does not mean that to decolonise the curriculum we wish to entirely remove the dominant force, but instead to balance the debate to ensure students are not only being taught the language of the coloniser, and to allow students to see that those who were colonised are not inferior within their field.

With this in mind, the Students’ Union want to ensure that our students are getting the most out of their education here at Middlesex. This means moving away from a value system that tells us whose knowledge is valuable and how it should be shared, towards one where the complexity and diversity of knowledge is embraced and accounted for. We are working to encourage implementation and increase the use of diverse, non-European scholars to be used across all faculties in every course at Middlesex University.

That's why I encourage you to complete the survey below to help us make our education more inclusive!