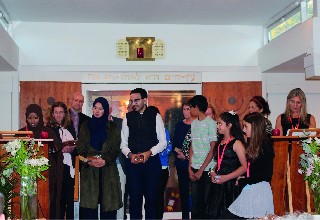 Middlesex SU wins a pledge from Barnet Council Leader and local MPs to take in 30 Syrian child refugees over the next decade!

With the conflict in Syria passing its eighth year, millions of Syrians have fled to Jordan, Lebanon and Turkey, this includes one million Syrian children. It is an absolute honour for me to share with you the unprecedented success of our Syrian refugees campaign launched on the 23rd of September 2018! We at Middlesex SU in partnership with local faith and civic institutions, recognise we can play a part to bring some of these children to safety.

As your elected officers, myself and our SU President Ayah, have been working in partnership with local synagogues, churches, mosques, schools and other local community organisations to launch a joint campaign on Syrian Refugee Children with Citizens UK.

This can be achieved, if every local authority in the country takes just 3 children a year.

The most recent phase of the Syrian Refugees campaign was launched last month at the annual Sukkot ceromany at Finchley Progressive Synagogue. At the event we celebrated the 3rd anniversary of Barnet Council agreeing to resettle 50 Syrian Refugees, a Campaign which was led by our former MDXSU Vice President, Sayed Alkadiri. We also marked the 80th anniversary of the Kindertransport, when Britain welcomed 10,000 Jewish children during the Second World War.

Over 200 guests attended the ceremony, including the Lord Mayor of Barnet, the Leader of the Opposition Cllr Barry Rawlings, Mike Freer MP and Paul Kirk from Middlesex University.

And together we celebrated, remembered and pledged to act on child refugees. And I’m proud to announce the leader of Barnet Council, Cllr Richard Cornelius accepted our ask of accepting more Syrian child refugees in Barnet, if it can secure government funding.

“In this year, the anniversary of the Kindertransport, Barnet can hardly fail to fulfil its part of this ambitious plan”

This landmark decision is a first, not only for our Students Union and our University. But also a first for Barnet Council, as the first Conservative-led local authority to commit to take in more child refugees, if government funding is secured. To really push for this, we also secured a commitment from Mike Freer MP to organise a meeting with the Minister of State for Immigration with Caroline Nokes and to push her to agree to fund this proposal.

MDXSU has extensively worked as part of Barnet Citizens – along with Finchley Progressive Synagogue (FPS) and refugee support groups – historically winning a commitment from the council to welcome 50 Syrian families, who are now all living in Barnet and have become part of our institutions, our work fields and our culture. We even have some of those refugees, studying here at Middlesex.

I would like to thank everyone who took part of this campaign including SU staff and Middlesex University staff, and of course all of our students who have been so supportive of this campaign over the last three years.

I would like to end, by thanking our SU President, Ayah, for her work, her support and ultimately her leadership on this campaign. She has supported me these past few weeks on every level, and was a brilliant co-host with Rabbi Rebbeca of the event. Together they showed an image of multifaith and multi-generational unity, facing up to the biggest challenge of our times, to solve this refugee crisis and make Britain one of many safe havens for child refugees.