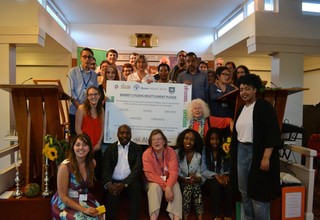 Middlesex Students’ Union is proud to announce that following our campaign with Citizens UK, Barnet Council has agreed to resettle fifty Syrian refugees in the borough.

Councillor Richard Cornellius, leader of Barnet Council, accepted the request at the Barnet Day of Action event on Sunday 27th September, and will take it to a Council vote in October.

The Syrian Refugees campaign was launched in July 2015 with the aim of addressing the UK’s poor record of resettling refugees, raising awareness of the refugee crisis and convincing Barnet Council to resettle fifty vulnerable Syrian refugees.

To help eliminate barriers faced by new refugees, campaigners approached local medical providers, training establishments, landlords and schools to ensure that refugee needs for accommodation, education, healthcare and employment could be answered. Sayed Alkadiri, MDXSU Vice President and campaign leader, said, “we wanted to show the Council that these practical concerns had been answered already, so all they needed to do was accept.”

The campaign received broad local support from more than 75 local businesses, schools, churches, mosques and synagogues, as well as Middlesex students and the local community.

Campaigning culminated in the Barnet Day of Action event at the Finchley Reform Synagogue, and was hosted by Alkadiri alongside local Rabbi Rebecca Qassim-Birk. Around 200 guests attended the day of speakers, performance and celebration, including Middlesex University Vice-Chancellor Tim Blackman.

We would like to take this opportunity to thank students and the local community for their contribution to this first success, whether you attended the event on September 27th or took one of our suggested pledges to support the campaign.

MDXSU is now expanding the campaign to lobby the government to resettle 1000 Syrian refugees in the UK before Christmas 2015. Again, we will be working at a community level to ensure that incoming refugees are able to access health, education and job opportunities.

“Students’ Unions have historically led the way in standing in solidarity with oppressed people around the world”, says Alkadiri. “It’s important for us to work together to face this massive international crisis”.

To find out more, please click here or speak to us at our Freshers’ Fair on Thursday 1st and Friday 2nd October.