The Referendum Results are in! 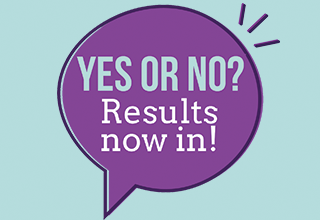 Between Monday 3 and Friday 7 December 2018, students across campus voted on three referendum questions submitted by students.

The three questions were submitted by students either hrough the Idea for Change platform, through a petition, or through the MDXSU Executive Committee. These are all platforms in which students can have their say on how to change things that affect them at Middlesex University.

The three ideas were all non-academically focused, which meant the next step in their process was to be voted on by students in a yes or no referendum.

The three questions that students were asked were:

1. Should MDXSU work to ban the use animals for human entertainment on campus?
2. Should MDXSU campaign for direct transport from university-associated halls of residence?
3. Should MDXSU have a policy to support a second referendum on the final Brexit deal?

In order for a referendum to pass, there has to be a minimum number of votes cast, and the majority of those votes has to be in favour of the question. Where a referendum has passed, MDXSU are now mandated to campaign for these ideas.

1. Should the Students’ Union ban the use animals for human entertainment on campus?

Submitted by: Shayna Weisz
The idea: To ban the use of animals for human entertainment at Middlesex University. This would mean MDXSU would work with the university to prevent animals being used at events for the purpose of entertaining students, staff and other visitors, as well as preventing MDXSU from using animals in this way.
The results: 60.1% of students voted in favour, with 39% of students voting against this idea. As this referendum achieved the required turnout, this idea is passed.

2. Should the Students’ Union have a policy to support a second referendum on the final Brexit deal?

Submitted by: Erica Ramos
The idea: For MDXSU to support a second referendum on Britain leaving the European Union. MDXSU would work with national organisations and campaigns to call for the UK Government to hold a second referendum, on the basis that leaving the EU would have a detrimental effect on the international culture of Middlesex University.
The results: 87.1% of students voted in favour, with 13% of students voting against this idea. As this referendum achieved the required turnout, this idea is passed.

3. Should the Students’ Union campaign for direct transport from university-associated halls of residence?

Submitted by: Mangalesh Kanesvaran
The idea: For MDXSU to work with local services and the university to make transport to campus easier from university-associated halls of residence. This idea was submitted through the Idea for Change platform specifically about Wembley halls, but the MDXSU Executive Committee felt that this could be a potential issue for students from other university halls.
The results: This referendum unfortunately did not receive the required amount of votes, and therefore is not passed in this referendum.

The next steps for the ideas that passed here is for the MDXSU Executive Committee to work with the students that submitted the intial ideas to implement these new MDXSU policies.

Please visit MDXSU's Ideas for Change platform to vote on other current students ideas, or to submit your own! You can also speak to one of your elected MDXSU representatives.

If you have any further queries about the referendum results, or about making change on campus, please email our team at studentvoice@mdx.ac.uk

For results of the December 2018 NUS Delegate elections, click here.