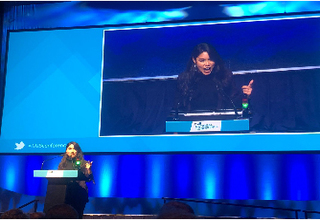 National Conference is the sovereign policy-making body of NUS and brings together nearly a thousand delegates from students’ union across the country to discuss, debate and vote on motions and elect political leadership of the organisation for the year ahead.

The conference is split into four “zones”: welfare, union development, education, and society & citizenship. Within each of these categories delegates across the country have submitted policy motions to be discussed and voted on.

Each of the zones is headed by full-time vice-presidential officers elected at the annual conference, and our very own Vice President of Business & Law, Erica Ramos battled for the role of full-time Vice President of Union Development against two other candidates and won the position with her strong campaign and inspiring speech.

Just watch her fierce ‘Roar for Ramos’ campaign video and her speech at conference below:

“To have been elected as the next Vice President Union Development for the National Union of Students is both a humbling and honourable privilege. Middlesex Students’ Union has shown me that being an officer is so much more than just representing student voice at university meetings. It’s Students’ Unions like Middlesex SU that express the value of students involvement in making positive change in society: whether it is to secure scholarships for refugees, to tackle sexual harassment and violence on campus, educating people about how important Mental Health provision is... and so much more! This is why I ran to be VP Union Development. To give SUs like MDXSU the empowerment and recognition they deserve, which includes officers and student leaders across the country constantly fighting for a better world. And I am hopeful that myself alongside the newly elected NUS team will provide the correct direction for NUS - a functioning, fighting, and fierce movement!”

And we've got her first interview 😉 pic.twitter.com/xOEPZgtQrW

We’re proud of Erica’s achievements here at Middlesex University, bringing light to sexual harassment on campus, mental health, free sanitary products on campus and her work with International students, societies and liberation communities at MDX, and we know she’ll continue her legacy doing incredible work for students across the nation!

We’re also immensely proud of our other Student Officers, Lucy Holland and Ayah Benberna, representing MDXSU and passing motions on Sexual Harassment and Violence & Hate Crime, Student Housing, Brexit and Anti-Knife Crime! You can read the full motions submitted by MDXSU HERE. Below are just some of the speeches our incredible officers delivered at conference:

If you're interested in your Students' Union work, come along to the Big Union Meeting on Monday 29 April at 3pm where you'll get the chance to query MDXSU's finances, trustees and parties we're affiliated with. You'll also get the chance to hear from your Student Officers and their achievements - also, question them on thier work and decisions this year.

CLICK HERE to learn more about the Big Union Meeting.